Top technology companies often benefit from having highly scalable business models that pave the way for dramatic sales and earnings growth, given the right opportunities and proper execution. Investors who build early positions in these kinds of businesses often go on to enjoy life-changing returns.

Recognizing these incredible opportunities is always much easier in hindsight, but studying massive success stories can also provide a useful template for identifying other companies that are capable of delivering incredible performance.

With that in mind, read on for a look at three stocks that went on to turn a $10,000 investment into $1 million — and then much more. 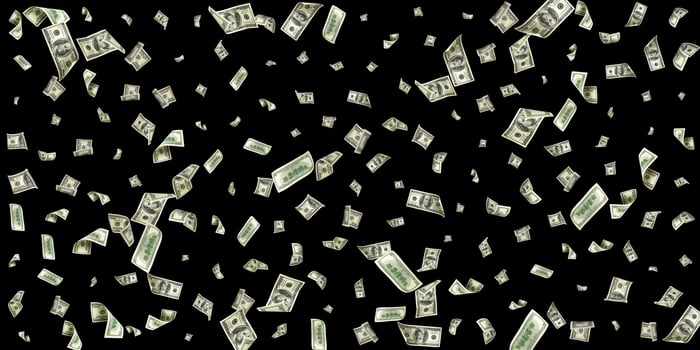 Graphics processing unit (GPU) specialist NVIDIA (NASDAQ:NVDA) went public in 1999, with shares trading in the range of $1.40 per share on a split-adjusted basis. The gaming industry was going through a period of rapid growth at the time of the company’s public market debut, and dramatic leaps in graphical performance were being delivered in relatively short intervals.

NVIDIA’s GPU technologies have played a big role in powering advancements in video games, and investors who saw potential in the growth of interactive entertainment and visual effects had an opportunity to purchase the company at prices that proved to be steals. However, it was ultimately the emergence of new use cases for GPU technologies that powered much of the stock’s incredible growth. High-performance GPUs came to be useful for influential new technologies, including data centers, artificial intelligence, and machine vision — triggering incredible growth for NVIDIA stock.

At the time of the company’s public market debut, it was valued at roughly $630 million. If you purchased $10,000 worth of shares at or shortly after the company’s initial public offering (IPO) and held on to your shares, you would have enjoyed stellar performance. 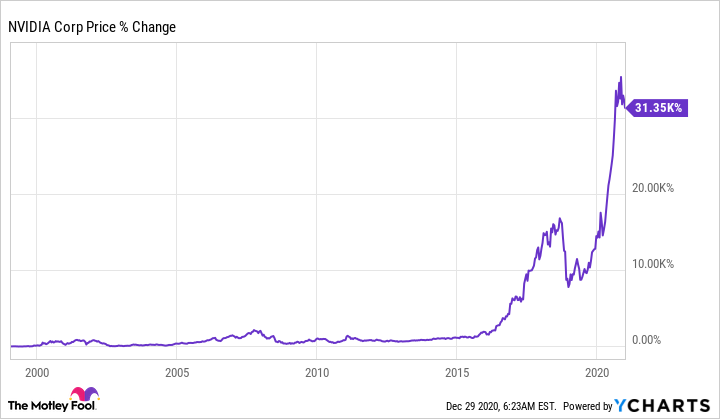 A $10,000 investment in the semiconductor company on the day of its IPO would have reached a valuation of $1 million in 2017, but more huge gains were still ahead. A little more than two decades after its public debut, a $10,000 investment in NVIDIA would be worth approximately $3.77 million.

Netflix (NASDAQ:NFLX) has been one of the stock market’s biggest winners since it went public in 2002. The current streaming leader got its start as a video rental service that allowed subscribers to receive DVDs in the mail and then return them to gain access to other titles. The original service posed an immediate threat to Blockbuster’s video rental empire, but it wasn’t until Netflix shifted its focus to streaming-based distribution that the company’s share price really started to explode.

The chart below tracks the entertainment giant’s stock performance following its IPO. 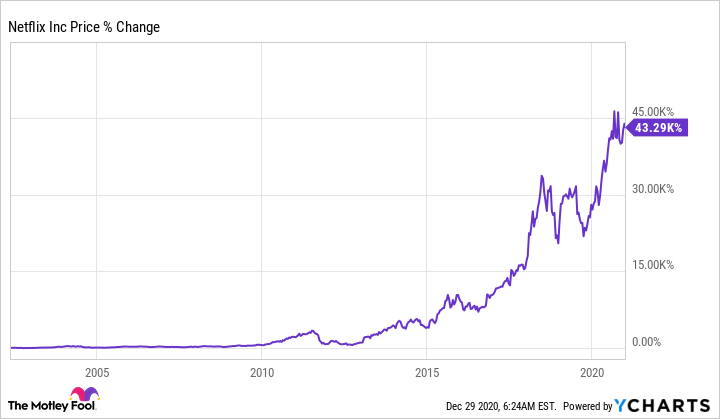 A $10,000 investment in Netflix stock at the time of its public market debut would go on to hit a valuation of more than $1 million in 2017. However, as with NVIDIA, investors who chose to sell their stake at that point would have missed out on dramatic growth in the years that followed. Based on today’s prices, that initial investment in Netflix would now be worth an incredible $4.76 million.

If you asked a room full of people to name the most influential and innovative businesses over the last few decades, there’s a good chance that Amazon (NASDAQ:AMZN) would top the list. Under the guidance of CEO Jeff Bezos, the company pivoted from being an online bookseller to a general purpose e-commerce platform to a tech-driven enterprise with even greater scope. 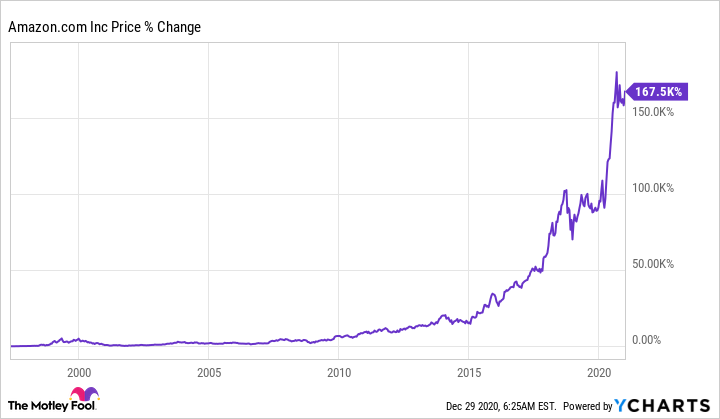 Amazon hit the market with shares trading in the range of $1.50 on a split-adjusted basis, and $10,000 invested in the company soon after its public market debut would have been worth more than $1 million by the year 2010. Going from $10,000 to $1 million in just 13 years is amazing, but Amazon’s incredible stock performance was just getting started.

Jump ahead another decade to the year 2020, and the stock’s value had increased by roughly 20 times from the level that turned many initial investors into millionaires. If you bought Amazon stock on Day One and held your investment across the company’s roughly 23-year public history, your shares would be now worth a staggering $21.46 million based on current prices.

While most people in the U.S. probably have direct experience with Amazon’s online retail business, many are unaware that the company’s cloud computing business accounts for the large majority of its profits and has played such a big role in the company’s incredible stock performance. Jeff Bezos and Co. identified two world-shaping growth markets, and the company shoring up dominant positions in both e-commerce and cloud computing led to incredible returns for shareholders.

What do these life-changing winners have in common?

Outside of operating in the technology sector, NVIDIA, Netflix, and Amazon might not have a whole lot in common at first glance. However, there is an important connecting thread that runs through each of these incredible success stories. Each of these world-beating companies parlayed a strength in its original core business to branch into new growth opportunities.

Predicting how businesses will evolve over the long term remains extremely difficult, and most early investors who enjoyed stellar gains with these stocks probably didn’t count on many of the moves that wound up driving incredible stock performance. The good news is that they didn’t have to. Investing in companies with strong core businesses yielded huge gains as new opportunities arose.