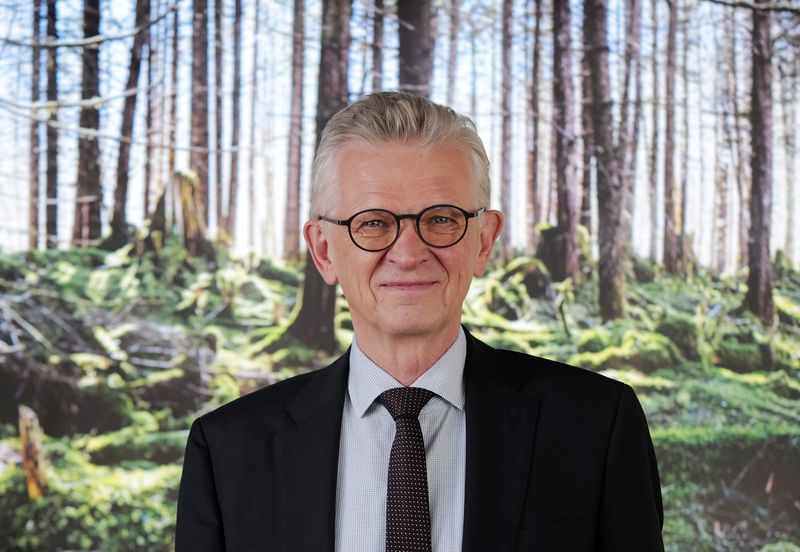 © Reuters. Bertram Kandziora, CEO of German engineering company Stihl, poses for a picture following an interview with Reuters in Waiblingen

By Paul Carrel and Tom Sims

BERLIN/FRANKFURT (Reuters) – In Germany’s industrial heartland, engineering firms have come up with a recipe for surviving the coronavirus pandemic.

Keep spending on research and development even if sales drop, build a financial buffer so you can craft a long-term business plan, be flexible with dealers to keep supply chains intact, have an innovative mindset and see crises as opportunities.

It’s certainly a strategy that is paying off for some of the small and mid-sized “Mittelstand” companies (SMEs) that together provide almost 60% of all jobs in Germany, according to Reuters interviews with six chief executives.

Commerzbank (DE:), the biggest lender to Mittelstand firms, also told Reuters that the number of companies going into “intensive care” was lower than it had feared and there was no rush by its clients to get new credit lines.

Stihl, for example, took an unusual step when lockdowns hit sales of its chainsaws, lawn mowers and hedge trimmers – it carried on making them and helped some of its struggling retailers stay afloat by extending their payment terms, Chief Executive Bertram Kandziora told Reuters.

The gambit paid off.

After a tough couple of months, demand soared for Stihl’s tools as people stuck in lockdowns spruced up their gardens. Since May, Stihl has enjoyed double-digit sales growth and is working on Sundays to fill its orders.

To be sure, the landscaping industry has been a sweet spot during the crisis but Stihl’s ability to navigate the lean lockdown months reflects a particular advantage of Mittelstand firms – they are typically family owned, with long-term horizons and strong balance sheets to see them through rough patches.

SMEs in Germany are also generally larger than in other European Union states, surveys by the European Statistics Office, Eurostat, show. Moreover, 90% of German companies – specialist engineering firms featuring prominently among them – are family controlled, says the BVMW Mittelstand association.

The upshot is that fewer German SMEs turned to banks for loans in the April-September period than similar companies in Spain, Italy and France, a European Central Bank survey shows.

An August survey by management consulting firm McKinsey of over 2,200 SMEs in five European countries showed fewer German firms feared they would have to postpone growth programmes than companies in France, Italy, Spain and the United Kingdom.

“Due to the fact that the majority is still family owned, the equity ratio is high and offers a good cushion for difficult times,” said McKinsey partner Niko Mohr, a Mittelstand expert.

Stihl, a family business founded in 1926, took the decision not to become hostage to banks several decades ago.

It has since built up its equity ratio to 70% to ensure it can take business decisions independently of any lenders who may be more focused on the short term.

“Because of the negative attitude of the banks, the family owning the company then came to the conclusion that they should not let the banks dictate their policy but should in future finance the company from their own resources,” Kandziora said.

Arburg GmbH, a family-owned manufacturer of injection moulding machines for plastics processing near Stuttgart, also went into the pandemic with solid finances, which allowed it to look through the crisis.

“The corona pandemic has no impact on our medium- and long-term development and production strategy,” Arburg managing partner Michael Hehl told Reuters. “We firmly believe that it would be completely wrong to put the brakes on innovation now.”

A survey in September survey by Germany’s Mechanical Engineering Industry Association (VDMA) showed a majority of members aim to maintain or raise investment budgets next year, with nearly a fifth planning an increase of 10% or more.

Success stories like Stihl’s belie a mixed COVID-19 picture in Germany. Across all sectors, one in 11 firms is threatened by insolvency, a survey of 13,000 companies by the Association of German Chambers of Industry and Commerce (DIHK) showed.

Patrik-Ludwig Hantzsch at Germany credit agency Creditreform expects 24,000 corporate insolvencies in Germany in 2021 after 16,000 to 17,000 this year.

And businesses more reliant on monthly cash flow are suffering. The German hotel and restaurant association (DEHOGA) said a survey last month of 8,868 businesses in the sector found 71.3% of them feared for their existence.

Commerzbank, however, says many industrial Mittelstand companies have the financial buffers to ride out the storm.

The bank has a team closely scrutinizing the health of its clients, studying everything from business models to figures on customer traffic and holding regular discussions with managers. It is expecting a modest rise in insolvencies once a waiver introduced to keep firms afloat during the crisis is lifted in January, but not the massive rise predicted by some.

“There isn’t a mad rush (for credit),” said Christine Rademacher, head of financial engineering at the bank. “Many of our customers have a buffer and no liquidity issues.”

Koerber in Hamburg is another Mittelstand company – with businesses from artificial intelligence to machines to package toilet paper – that went into the pandemic with solid finances and it has no intention of taking its foot off the pedal.

“We have made and will continue to make sustained and significant investments in research and development and further digitisation this year and next year. The demand for digital solutions has been given a further enormous boost by corona – this is a huge opportunity for us,” Chief Executive Stephan Seifert told Reuters.

In Munich, construction equipment maker Wacker Neuson said it is reviewing some of its investments, but it too is keeping up its R&D.

“The crisis is a balancing act between cost optimisation, a much shorter planning horizon and pressure to innovate,” said Chief Executive Martin Lehner.

The ebm-papst Group, which makes electric motors and high-tech fans, has also kept R&D investment stable this year despite a drop in turnover of almost 30% in April. “Now we are catching up month by month,” said Chief Executive Stefan Brandl.

The company based in Mulfingen is looking to benefit from three trends: air quality, which is at a premium due to the pandemic; digitalisation, which it can serve with fans to cool servers; and demand for products that use less electricity.

For many survivors, the crisis is also accelerating change.

One such company is MAHLE GmbH, which makes auto parts from electric powertrains to air conditioning. It plans to close two German plants and cut other costs to adjust to technological change in its sector and reduced demand due to the pandemic.

But despite an expected drop in sales of about 20% this year, Chief Executive Joerg Stratmann said it is maintaining R&D at a “high level”, such as spending millions on a development centre near Stuttgart with 100 engineers that opened recently.

It remains to be seen whether the Mittelstand is undergoing “creative destruction” – the term popularised in the 1940s by Austrian economist Joseph Schumpeter to describe unviable firms folding to make way for more dynamic enterprises.

But those firms in the right sector with healthy balance sheets say they’re ready to adapt with confidence.

“We want to seize the opportunity of this crisis,” said ebm-papst’s Brandl.